Milk is a basic ingredient for so many recipes as well as a favorite beverage.  But if you’re not able to run to the store for a gallon, powdered milk is handy and easy to use.  That’s why it is so important to include it in your food storage plans.

What is powdered milk?  Powder milk is made from fresh, pasteurized skim milk.  First, the milk is concentrated in an evaporator until 50% of the milk solids remain. Next, the concentrated milk is sprayed into a heated chamber where the water almost instantly evaporates, leaving behind tiny dry milk particles.  What is the difference between instant and non-instant powdered milk?  Instant milk is non-instant milk that has been puffed with air which makes it mix into water easier.  In fact you could just drop it into water and it would dissolve instantly.  Non-instant milk, also known as regular non-fat dry milk, requires more stirring and chilling before it can be served as milk.

It is very simple to use powdered milk.  You simply mix it up and drink it!  Some people add a drop or two of vanilla or a spoonful of sugar to their milk to enhance the flavor. In your baking or cooking, you can simply add the dry milk powder with the dry ingredients and the water necessary to hydrate it with the wet ingredients.  One word of caution:  some companies sell powdered milk that isn’t REAL milk.   They may call it a “milk alternative.”  These contain a lot of ingredients to make it taste good including whey, partially hydrogenated vegetable oil, and high fructose corn syrup.  It is not 100% milk.  As a result, it tastes yummier, but does not have as much protein, calcium and other nutrients.  It will also affect your baking.  It doesn’t have the vital milk protein which is important in some cooking and the extra shortening may change what you are cooking.

Having never used powdered milk before, I decided to try it in one of our favorite recipes:  Hot Fudge Sauce.  This recipe is so easy and tastes delicious on ice cream or brownies.  Here it is: 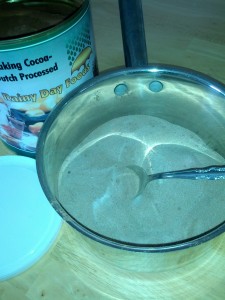 Add ½ cup of butter, 1 teaspoon of vanilla and 1 12oz. can of evaporated milk. 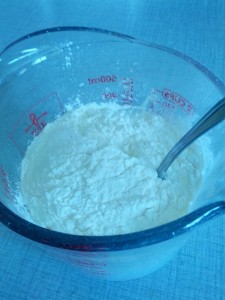 Instead of the evaporated milk, I used 9 tablespoons of powdered milk and 9 oz. of water.  I mixed it together separately and added it with the butter and vanilla. 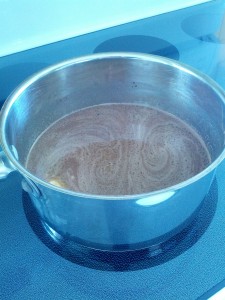 Bring this to a boil over medium heat stirring constantly.  Boil for 3-5 minutes.

Serve over ice cream.  You can store this in your refrigerator for several days.  Enjoy! 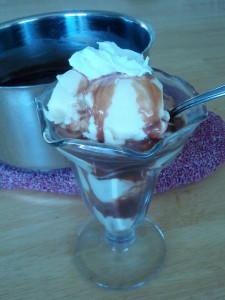 Since I am always looking for new ideas, be sure to comment below on ways that you like to use powdered milk.