Spelt is probably the most delicious grain you’ve never heard of.  Spelt (Triticum spelta) is an ancient grain which should not be confused with common bread wheat.  It was one of the first grains to be used to make bread and can be traced back to about 6000 B.C.  It is even mentioned in the Bible. Known for its slightly nutty flavor, spelt has long been popular as a health food in Europe, where it is sometimes known as ‘farro’ and ‘dinkel’.  It wasn’t until the early 1900’s that spelt migrated to North America. By the early 1970’s there was virtually none being grown in North America because the modern, hybridized version of wheat could be grown and harvested faster and cheaper.  Today, thanks to a growing interest in more healthful foods, spelt is making a comeback.

Spelt is similar to wheat in appearance, but it has a tougher husk, which may actually help protect the host of different nutrients inside the grain.  It is an excellent source of manganese, and a good source of protein, niacin, phosphorus, copper, and zinc.  The riboflavin in spelt may help with migraines, and the fiber in it can help to reduce cholesterol levels.  Because of the tough outer hull, it protects the kernel from many insect pest and infestations, making the grain easier to grow without pesticides.  Spelt does not seem to cause sensitivities in many people who are intolerant of wheat.  Spelt does contain gluten but the gluten in spelt has a different molecular make-up than the gluten in modern wheat.  If you have a known wheat allergy or sensitivity, consult your doctor before introducing spelt into your diet.

Spelt is available in its de-hulled, whole grain form (often referred to as spelt berries), which can be prepared and enjoyed in place of rice or potatoes.  They can be added to side dishes, salads, and cereals.  Before cooking spelt berries, rinse them thoroughly under running water.  Soak them for 8 hours or overnight, then cook them using 3 parts water to each 1 part of spelt berries.  Bring to a boil, reduce heat and simmer for about an hour.  It has a sweet, nutty chewiness that tastes a little like barley.  It stays fluffy and distinct when cooked.

You can also grind it to make spelt flour.  Spelt flour can be substituted for common wheat flour to make bread, pasta, cookies, cakes, muffins, and pizza crusts.  Baking with spelt is similar to baking with other flours, however, due to spelt’s water solubility, bakers often notice that a little less water is required. When using your favorite recipes, it is recommended that you use ¾ of the liquid you would normally use.  More liquid can be added as necessary.  Also the gluten in spelt flour is a little unusual.  Unlike wheat flour, which is quite resilient and often needs a long kneading time to strengthen its gluten and give the bread structure, the gluten in spelt flour breaks down fairly easily.  This means it is pretty critical to not over mix it, or risk having a crumbly texture in whatever you are making.

Rainy Day Foods carries the de-hulled, whole grain form or spelt berries in a 6 gallon bucket, #10 can, 25# or 50# bag.  You can also get it in a 1.5# mylar bag for sprouting. Researching spelt has taught me so much about this little known grain. I truly hope that you have learned something new about spelt and how it can benefit you. 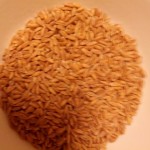 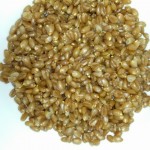