The Power of Popcorn 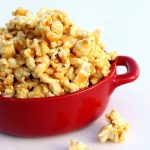 A few weeks ago we had our grandchildren visiting for a couple of days, with out their parents! This is a time for us to visit and bond with the children as they do not live close and visiting is not a daily or weekly event.

This group of 5 grandchild range in ages from 8 years old to 3 and are very active. Grandmother had everything under control with activities and projects to keep all of us busy.

After dinner on the last night of their stay, with dishes washed and the house placed back in order. It was time to relax, which meant going out side and watching the grands jumping on the trampoline and running in and out of the sprinkler. A great evening!

As it started to grow dark the outside activities came to an end.

Settling down after changing to dry clothes and turning on an animated (cartoons) show for the children. The grandchildren had a hunger attack.

I went to the kitchen in hopes of finding a few snacks for them and discovered that they had eaten all the snacks that were in the entire house. (How do they do that?)

With the 6 year old at my side with the look of utter of starvation in every sound that he made drove me to alternatives. That's when I remembered the bucket of popcorn in our food storage from Rainy Day Foods.

I quickly threw a pan on the stove top poured some oil in to start it to heat. Then I went and opened the bucket of popcorn. My panic formula calls for 2/3 cup of popcorn which I put in the pan on medium heat. I garbed some of the powdered cheese which we had gotten from Rainy Day Foods; 1 tablespoon, heaping, some Real Salt (realsalt.com) which they also sell, to taste. And a pinch of garlic granules to add a little jest. I also melted some butter and poured on the popcorn before adding the other dry ingredients. This is such an easy recipe I will try a few different flavors (ranch, kettle, dill) I am guessing this list is only limited to my imagination and stomach,in place of the cheese next time I cook some up seeing I opened the bucket.

I wondered after I fed the grandchildren, you know about GMO, so I looked it up and found that popcorn is a non-GMO and it has been a snack food for a long time. Bonus! I found all of this on popcorn.org. While I was doing a little research I thought I would look up about that powder cheese from Rainy Day Foods as well and found that their powder cheese is real cheese made from Dairy. Plus cheese is full of nutrients, calcium and vitamin A. (National Dairy Council) Pretty sure the grandchildren did not know that they were eating healthy. As a testament the grandchildren ate two batches. Till next time.