I have to admit something. I have always been afraid to try whole wheat foods. So when my husband brought home some whole wheat spaghetti from Rainy Day Foods, I was not very interested in cooking it. After a lot of discussion, I finally gave in and let our family try it. First of all, it has a darker color to it, which didn’t surprise me because whole wheat is darker. 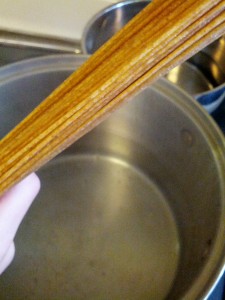 The second thing I was afraid of was cooking time. For some reason, I had it in my mind that it would take a lot longer. Surprise! It cooks up in the same amount of time as the regular spaghetti I am used to. I just followed the cooking time on the directions and it turned out okay. 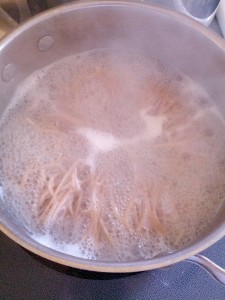 Another thing I was really worried about was the taste. I have to admit I was pleasantly surprised by it. It has a little different taste (more nutty) but was actually very good. My daughter totally loved it and the rest of the family enjoyed it as well. 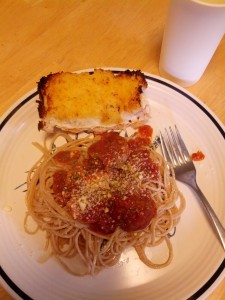 The last thing I was concerned about was the price and how long it would store. The cost of whole wheat versus traditional is about the same as is the storage life of both kinds of spaghetti.
The one thing I couldn’t dispute was the health benefits. Whole wheat contains 3 parts of the grain—the bran (the grain’s outer layer), the germ (the sprouting section of the seed), and the endosperm (the large, starchy center). When it is refined, the heat forces the bran and the germ out leaving just the endosperm. So the bottom line is that whole grain spaghetti provides about 3 times as much fiber and 25 percent more protein than traditional spaghetti and has fewer calories.
So if you want to try something new or even if you have already been eating whole wheat foods for a considerable amount of time, I would recommend whole wheat spaghetti.