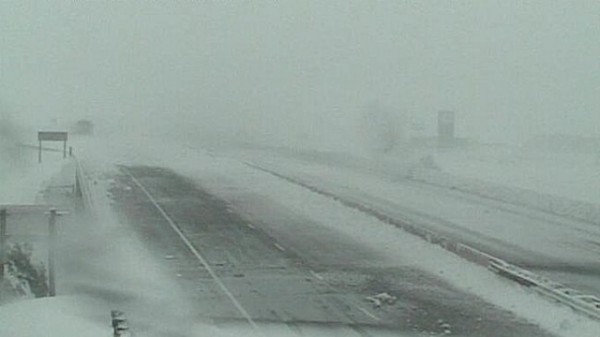 We recently had to make a day trip to another city for a doctor’s appointment.  It had been snowing off and on all day and our appointment wasn’t until later in the afternoon. The drive to the appointment wasn’t too bad.  The roads were mostly bare but the wind was blowing hard.  We worried about what we would find on our way home.  Would the roads be drifted with snow from the blowing winds? We had seen a couple of spots where it was beginning to push the snow onto the road and this concerned us.

After the appointment we ate some dinner and headed for home. We were still experiencing some heavy wind but the roads were still clear.  Despite this my husband kept worrying about what we were driving into.  We cleared the first mountain pass as it was getting dark.  So far so good.  About that time we received a call from my brother who lives in the same town that we live in.  He didn’t say a word about bad weather at home so we thought we were going to be okay.

It started snowing as we traveled across the area we call the flats.  It didn’t appear to be sticking on the ground so I wasn’t too worried.  As we passed through another town the weather seemed to be getting worse.  The wind had really picked up and it was snowing harder.  We knew we had about 30 miles to go with no towns, only flat areas and a mountain pass.

As we drove around the corner leaving the last town behind things went from bad to worse.  We suddenly couldn’t see the road or what was ahead or behind us.  The snow was swirling everywhere.  We had a large truck in front of us that we were using as a guide.  Suddenly it pulled over and we were left alone in the blizzard.  We talked about trying to pull over and turn around but we couldn’t see any turnouts and worried we would end up stuck in the gutter.

We decided our only choice was to keep going.  With our children praying in the back, I tried to keep looking for the white line on the right side of the road and the mile markers.  My husband tried to drive and keep looking for the yellow center line.  At some points, we were driving as slow as 5 or 10 mph.  A few vehicles met us coming the other way.  We took that as encouragement that the weather wasn’t going to be bad the entire way.  We caught up to a truck pulling a horse trailer.  They had their flashers on and were going very slowly so we put on our flashers and followed them.

As we crept along my husband and I worried about being stranded on the road and were we prepared to do so.  We have a bag in our vehicle with first aid supplies, a few food items, and some toiletries.  We also had a cooler with water and three blankets under the seats.  Our biggest concern was that we hadn’t filled up with gas before we left the city.  We had a little less than a half tank of gas.  If we had to run the vehicle all night would that be enough?

Time seemed to go by slowly as we drove. Sometimes it would seem to get a little better where we could definitely see the lines on the road and then it would become a total white out and we would be so disoriented that we couldn’t be sure where we were.  We continued to follow the truck using it as our beacon and hoping it would not turn off or run off the road.

At last we could tell we were climbing the pass and then dropping down into the town.  As we drove through that town we knew the next one was our town.  The closer we got to home the better the weather.  We felt nothing but relief as we pulled into our driveway.  We just sat there for a few moments trying to catch our breath and saying a prayer of thanks.

What did we learn from this experience? Sometimes we think of being prepared as having food storage in our homes.  We should also have food and other items in our vehicles for any emergencies.  We want to check our emergency bag to make sure it is up to date, we will still carry water and blankets with us, and we will make sure we have a full tank of gas when we go places like this again.  What we decided was that you can always be more prepared.