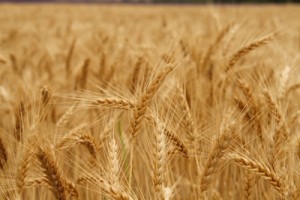 Walton Feed wheat is the best quality wheat due to the high standard we require in high protein but also in the cleaning process of our wheat. We do not use chemicals or heat but rather a 4 phase process which ensures the cleanest and best wheat available. This involves using the top of the line cleaners which results in the cleanest grain possible in the industry. The types of wheat cleaned in this manner are Hard Red wheat, Hard White wheat, Durum wheat, and Soft White wheat.

The first phase of cleaning begins by the wheat flowing onto a screen cleaner which is made up of a dual screen system. This process has the grain moving across a screen which allows the wheat to fall through sized holes leaving chaff on the upper screen to be removed from the system. A second screen below the first has smaller holes which allows smaller material than the wheat to fall away and then is removed from the system.

From there the grain flows to the second phase which is a gravity table that resembles a large triangular kitchen table. This table separates the light and heavy objects that are in the grain. It is done through a process using air and vibration. With air blowing through screen flooring as the table itself vibrates, heavy items are forced to go to one end of the table and the light items are sent to the opposite end of the table, with the wheat flowing to the middle section. The heavy and light items are removed from the system and the wheat continues on to the next cleaner.

Our next cleaner-the third phase-is called a de-stoner, It works basically like the gravity table except it is square with wheat flowing uphill and the heavier items, such as very small pebbles, going down the table and out of the system. It also operates on an air flow and vibration system like the gravity table.

The grain then proceeds directly into a packaging bin where it is placed in various packages, labeled and shipped.