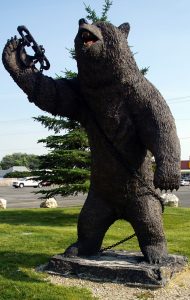 As legends go Old Ephraim has to rank as one of the biggest. In the prime of his life he stood 9 feet eleven inches tall standing on his back legs. He out smarted many a would be hunter, and there were a lot, that tried to bring the big grizzly down. Sheepherders also referred to the old grizzly as “Old Three Toes”who wandered through the Cache National Forest (https://www.facebook.com/pages/Cache-National-Forest/140553809303860) between 1911 and 1923. Ironically the name that stuck, Old Ephraim, was actually given to him by the sheep men after P.T. Barnum described a massive grizzly bear in California in a story Barnum wrote.

You see Old Ephraim terrorized the whole of the Cache National Forest area particularly sheep men, for he seemed to have a keen appetite for their sheep that pastured in the mountains of the forest. The mighty Cache National Forest encompasses Caribou, Bear Lake, Franklin, Cache, Rich, Weber, Box Elder and Morgan counties in its rugged high mountain splendor.

Old Ephraim's track through the Bear Lake mountains (https://bearlake.org/) was easily recognizable because of the deformed paw that had only 3 toes. The old grizzly was a true heavy weight at around 1100 lbs. So when the report came in of 154 adult sheep killed during the summer of 1911 one can appreciate why sheep men wanted the old bear and others like him gone.

One of those who sought after Old Ephraim was a sheep herder by the name of Frank Clark. Frank was born near Malad, Idaho in a place called Cherry Creek in 1879. He was an avid outdoors man who also raised sheep for a living and even at one time was part of the Ward Clark Sheep Company.

Clark while in the out doors always carried his rifle and his constant companion in the wilds, a sheep dog named Jennie.

By 1914 Frank had had enough of losing his sheep to the big grizzly and started hunting Old Ephraim in earnest. He set traps after taking time to learn all the haunts and habits of the grizzles. But never came close to getting Old Ephraim. His traps however did help reduce the grizzly population in the Cache Forest by over fifty bears. The more Clark tried to catch Old Ephraim the bolder the elusive bear became.

Then on 21 August 1923 Frank Clark found a new wallow that he thought Old Ephraim had made and he set his traps. He decided to make camp a mile down from the wallow. Setting up his camp in hopes he may get the big bear and finish the work in the morning light. He probably cooked in a dutch oven (https://waltonfeedinc.com/) dinner that night (maybe a one pot meal consisting of beef chunks, bacon, mushrooms, onions, carrots, potatoes, tomato powder, beef bouillon and seasoning) then Frank turned in early. The night was clear and beautiful in the late summer mountains.

Frank was awakened in the middle of the night by loud thrashing and groaning near his camp. His dog had not made a sound but the ruckus from up the mountain was almost deafening. Clark arose in the dark putting on his boots and picking up his rifle, he set out to investigate. His first thought was that a horse had gone down in the willows. Making his way up the creek he could not see very well but the noise had stopped until he had gone past a shallow neck in the creek where some willows spread out on each side. Then Old Ephraim let out a ear shattering yell; Frank knew he was in trouble. Now the bear was between him and camp with the nearest help 3 miles away. In the dim half light of night he could hear the chain rattling on the trap he had placed in the grizzly's wallow, which was now on Old Ephraim's paw and not in the wallow farther up the trail. (http://digital.lib.usu.edu/cdm/landingpage/collection/Ephraim)

Frank decided to climb the hill instead of going back towards camp. He thought he would be able to see the bear in the nights half-light if the bear climbed the hill after him. Frank spent the rest of the night up on the hill not daring to let down his guard for a moment. Every sound in the night bringing its own terror to Clark. At the breaking of day Frank made his way back to his camp looking for his old foe along the creek and willows.

Old Ephraim was moaning softly down in the creek in a bunch of willows near his camp. Not daring to enter the willows Frank Clark moved slowly around them trying to see into the large patch of willows in an attempt to spot the bear. Suddenly; Frank saw a patch of fur and fired.

The big bear rose to his full height of 9 feet 11 inches and came towards Frank. He had never seen such a big bear, he hesitated, seeing the 23 lb bear trap on Old Ephraim's paw with the 14 foot chain still attached. It was a once in a life time sight that drain the blood from Franks face.

As the grizzly moved toward Frank he fired his gun again and again. Yet Old Ephraim still moved closer to him. Finally Frank had fired 6 bullets into the old bear and it still came on. Frank knew he had only one shot left in that rifle, so he decided to head to Logan, but his dog Jennie came to his aid distracting Old Ephraim. This gave Frank the chance to fire his last shot at the bear which he took into Old Ephraim's head. He didn't miss. Frank made his way to the nearest sheepherders camp to tell his story. After a while the two of them went back and found Old Ephraim and then skinned the old grizzly and out of respect buried him.

Word spread quickly of the demise of Old Ephraim.

Within a few months curiosity overcame a local Scout Master in Logan, Utah a George R. Hill and his troop of boys, who decided to find the grave of the old bear and send the head in to the Smithsonian and make sure it was actually a grizzly. They found the grave after getting directions from Frank Clark. The Smithsonian confirmed the skull was that of a grizzly. The skull itself stayed in Washington D.C. Until 1978 when it came back to Utah for display at Utah State University. (https://www.usu.edu/)

Frank Clark was later reported to have said about his downing of Old Ephraim “If I had it to do over again, I wouldn't do it.”

Local scouts and scouters erected a memorial to Old Ephraim made of a four and one half ton stone to the big grizzly on 22 August 1966. Standing upright the stone equals the big bears height of 9 feet 11 inches. (http://www.utahmountainbiking.com/trails/ephriam.htm)

You have to hand it to these old sheep men who brave the wilds to make a living. They were often alone for months on end in these mountains with their sheep and trusted dogs. Once in camp they rarely came down to town. They packed everything they needed for the long stay in camp. I wonder if we are as prepared today for a “long stay” without having to go to town to refresh our supplies of food. Rainy Day Foods (https://rainydayfoods.com/) offers many choices to help with our “long stay” needs. Like vegetable stew blend, a great base for starting a dish along with some tomato powder you will be well on your way to a great meal. Of course if you are an avid outdoors man you may want to pick up one on their Outdoor Sport Emergency Kits.

It is believed that Old Ephraim was one of the last grizzles to roam the mountains of northern Utah and southern Idaho. Here in the valley of Bear Lake, bears still can be found, thus the name Bear Lake, so you will want to keep an eye out while visiting and hiking our trails. 'Till next time RL