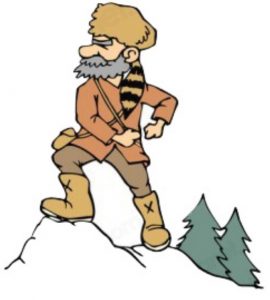 October is a time for tales. And one bigger than life folklore (villain/ hero) of the Bear Lake Valley was the one time resident that operated a trading post along the east bank of the Bear River just west of what is known as Big Hill for a few years starting in 1848. (http://idahoptv.org/outdoors/shows/pathwaysofpioneers/BigHill.cfm)

In the annuals of history Peg Leg Smith was a true mountain man, trapper, prospector, and even horse thief, who knew and worked with many of the other legendary mountain men of his day like Jim Bridger, Bill Williams, Kit Carson, Tom Fitzpatrick, Joe Walker and Jed Smith to name a few.

This is a tale you may want to tell your children or grandchildren that can keep them attentive and calm on a dark night when the wind blows cold with a sandwich or hot soup from Rainy Day Foods or to entertain them while riding in the car, perhaps even to get them to sleep with these tales of the west.

Peg Leg was of a Scottish-Irish decedent born in Kentucky and, being tempted with adventure, left his parents home ending up in Missouri and following Antoine Robidoux on a two year trapping /trading expedition to the Indians of the west in 1820. Peg Leg fell in love with the west and the mountain man life, so after a few years of trapping and trading with Antoine he traveled over to New Mexico in 1824 to venture on his own, spending a great part of his life trapping the rivers of the southwest. During this time he led a very colorful life full of all the adventure he sought after. He trapped for furs, went hunting and played the dangerous game of cloak and dagger between the Indians and the Mexican government.

In order to get the furs to market the trappers needed to run a gauntlet between the Mexican military patrols and Apache's or else suffer the consequences of having their furs confiscated by the Mexican government or robbed by the Indians, with the added prospect of losing one's life in the process if either was encountered. While Smith was on his way to market his furs at Fort Bent he earned his nickname Peg Leg.

You see Smith had gathered some furs and with others had started out to deliver them to Fort Bent. (https://www.nps.gov/beol/index.htm) In between them and the fort were the two obstacles, the Mexican government patrols and the Indians. Around North Park, Colorado the Indians found them, a battle ensued in which Smith was wounded in the leg. Surviving the encounter he and another trapper assessed his wound and knew that the leg had to come off. Smith had become a hardened mountain man and trapper by this time and now the time had come to prove how hardened he had become. With the aid of some local brew he started carving on his leg, getting down to the bone before passing out; then fellow trapper Milton Sublette stepped in and sawed through the bone removing the lower part of his leg. It is told they then seared the wound with a glowing hot bullet mold. He survived by the help of some Ute Indians, which his fellow trappers had left him with, who chewed roots and berries into a salve that was then applied by spit onto his wound. After reviving, he spent the winter in their camp whittling himself a wooden leg which gained him his nick name of Peg Leg.

From there his travels took him far and wide with one of those stops being here in the Bear Lake Valley with his establishing a trading post as a rest station for those traveling the Oregon trail. (https://www.oregontrailcenter.org/) With many a westward bound wagon train and adventurer stopping to restock supplies. Horse's and cattle were kept in abundance, grazing near his cabins to help ease the burden of the journey especially when replacement animals were needed to be made by those traveling the Oregon trail. Even milk was available at Peg Leg's trading post and fresh home made bread, a real treat for travelers on the dusty road all of which was provided from local settlers known as Mormons to the trading post. A hearty hot meal like bean soup (beans, pearl barley, ham, onion, carrots, corn, pepper and salt) awaited those who stopped to rest. With buttermilk biscuits or corn muffins to fill in the gaps it was great fare for the weary traveler.

One traveler who stopped was a Dr. Charles Boyle who made the observation that Smith is a jolly but one-legged man that Boyle sold a pint of brandy too. Another traveler said that Peg Leg was a fleshy, shrewd looking man and as rough as those that surrounded him.

Of course the Bear Lake Valley could not hold him long from his thirst for adventurer which led him farther west.

As the fur trade ended (https://en.wikipedia.org/wiki/North_American_fur_trade) Peg Leg tried his hand with horse stealing and not venturing into the trade lightly his “gang” became the largest horse theft operation in the southwest with most of the horses coming from the big ranch's of southern California. As pressure mounted to put a stop to all the horse rustling, Peg Leg turned his attentions to prospecting. For several years he roamed southern California and the deserts of the southwest in search of the elusive golden metal. While traveling in the desert, a sand storm came up and he lost his bearings. Once the storm had blown over he climbed a steep hill to see where he was and doing so looked down and saw some speckled black rocks. He picked a few up and went on his way. After a time he took them in to be analyzed to find out what kind of ore he had found. It turned out to be gold! But for the life of him he could not remember where the hill was that contained the treasure. He sought after the gold even taking partners into the deserts in search of the lost gold. He passed away in a San Francisco hospital in 1866 failing to find his lost treasure.

Hopefully none of us will lose our treasure along our life's way. Just like the pioneers who carried their food reserves to see them and their families on their way into the unknown, we also need to prepare for the unknown in our futures by having food stored for long term use. Check out the Rainy Day Food site (https://rainydayfoods.com/) that can help you with these needs with items like food-storage units or paks and water storage solutions. 'Till next time RL