That Crisp Crinkling In the Air 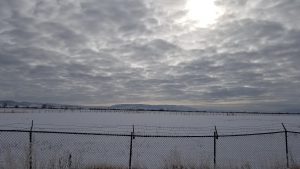 This morning was one of those "it's cold out here" mornings. The sun had not yet arrived but the stars were out in all their glory twinkling as they only can after a snow storm. Then, once a winter storm is over, the cold pushes its way in, freezing that slush and water that were running around the day before. So the run this morning was cool with the crunch of snow which said that the old thermometer was pushing zero. That's probably why the gas heater kept in the corner kept turning on every 10 minutes before I went for my run.

The first thing I noticed after getting outside were those stars; then the cold. But I was dressed for the cold. Those stars could probably tell quite a story of what they have seen. If you are up early in the morning you have probably noticed the moon, now just a sliver, with a bright star just above and to the right lighting up the night sky.

Venus at this time of year is pretty bright in these early morning hours. But did you notice Spica a star not quite as bright just to Venus's right and a little above? But if you stop running for a moment, sometimes I have to do that so I can step off the road for an on coming car, just below the moon and not much to the left you will get a glimpse of Mercury. (https://www.space.com/16149-night-sky.html)

In these crisp early mornings the view is fantastic to see the celestial movements.

When the children are visiting they miss most of these early morning events which are calming and put us closer to the overall real picture in life, they visit with each other too late at night I think. We do enjoy them visiting especially when they help out in the kitchen.

In fact while they were home this last time I was elected to help in the kitchen and was assigned to do the gravy for the turkey. The recipe that I used called for some added chicken broth but I went and substituted some Montreal Chicken Seasoning, I seem to always muck up recipes with something I think will make it taste better. Fortunately it worked - bringing a vibrant flavor to the gravy. You may want to substitute some in your next gravy. We got our Montreal Chicken Seasoning from Rainy Day Foods where they also have other seasonings that will add a little zest to those made from scratch meals. Of course not everyone likes gravy but if you do there are lots of ideas on line. (https://www.pillsbury.com/recipes/dish-type/gravy)

My wife was telling me just the other day of some of her ancestors who had helped many that came to the valleys during the winter in those early pioneer days who, using horse drawn wagons and hand carts as transportation, struggled when winter approached slowing their journey to the valleys of the west. She told of how cold and deep snow had caused them to struggle in making their trek west. When men and older boys from the Salt Lake Valley would go and help these wagons, her ancestors from the Hunter family were among those sent to help the immigrants bringing needed supplies and food to help make the trip in the winter more bearable. In fact, when they stopped for the night, these relief crews found it was so cold that the men and boys chose not to sleep in the wagons, thinking it would be warmer sleeping under the wagon itself. When they awoke the next morning their hair was frozen to the ground. Now that's cold! After unloading the supplies for these pioneers the wagons were loaded again with the women and children from these hardy souls who were on their way to Salt Lake Valley to give them a needed rest on the remainder of the trip. (https://www.familysearch.org/)

Today there are many that take snow machines into the back country in the cold for fun and enjoyment. My wife will tell you there is no fun in freezing while you are zipping along at a high speed when the temperature hovers around zero. I prefer cross country skiing, a little warmer, but then I have ridden up a hill or two by snow machines so that we could tube back down for a church activity, it is fun gliding along the fresh snow. One of my co-workers has a snow machine and he loves to climb the mountains in the winter with his, especially after a fresh snow.

I know that we have better snow equipment now than back in the pioneer days. But the old advantage is true - if we are prepared and if something goes wrong at least we are prepared to handle the problem. I just read a story of a group of hand cart people who wanted to travel quickly to their destination back in the day and they mentioned having to cross rivers, mud, snow and not to over look a few high mountains. They commented how happy they were about only breaking the axle on only 4 of the hand carts they were using during the trip and how blessed they were to be able to be near some trees so they could repair them when it happened. I am pretty sure I would not be that prepared, but maybe I should be. In my case I like to keep some hand warmers on hand all of the time. It is also good to keep a filter water bottle or a life straw in any recreational vechical because you can get pretty thirsty if you are a long way up a mountain, whether it is winter or summer. We also carry a tow rope in our 4-Wheeler's, which the boys were happy was there the other day when they ran one of them out of gas and they had to tow it home from off the hill in a foot of snow.

But alas it is winter and even the best who are prepared with tools and extra parts are not always able to solve a problem in the hills. So make sure you have a tow rope, just in case, or an Outdoor Sport Emergency Kit that has just about everything you will need in the outdoors.

Of course for my running early in the morning a good pair of gloves and hand warmers on those really cold days are a must. It does not hurt to have a little oatmeal all hot and ready when you get into the house to warm one up quickly. Adding a few nuts and brown sugar with cinnamon is a bonus to a hot breakfast. It is a great feeling on those early mornings to look up and view the stars. And when I view them at this time of year I wonder what the star looked like that inspired the three wise men to make their journey afar. 'Til next time. RL