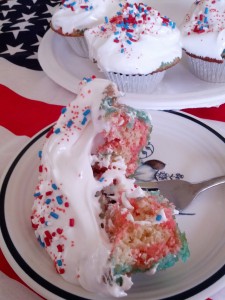 I can’t believe it’s almost the fourth of July! If you’re like me, that means you are looking for a fun, patriotic dessert to serve at your barbeque or picnic. This year I’ve decided to try some Fourth of July Cupcakes. I made some ahead of time to see if they were picnic worthy. I liked the fact that they didn’t take too long to make, were really cute and my family loved them. Here is the recipe:
Fourth of July Cupcakes
Prepare cupcake tins with paper baking cups or grease and lightly flour tins.

2 c. flour
1 tsp. baking powder
½ tsp. baking soda
1/8 tsp. salt
Mix these 4 ingredients together in a bowl and set aside. 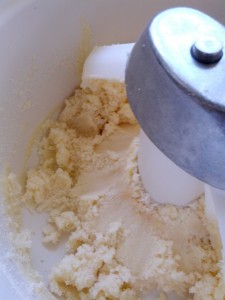 Divide batter evenly between 3 different bowls. Add red food coloring to one and blue food coloring to one. Place about 1 tsp. of each color in cupcake pans. Bake in a 350 degree oven for 20 to 25 minutes. Makes 30 cupcakes. After they are cool frost with desired frosting. 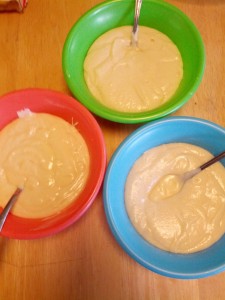 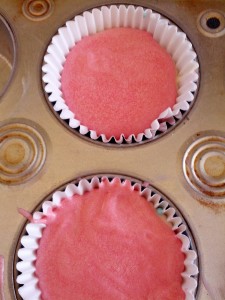 I decided to try something different from my usual buttercream icing, so here is the recipe:

Fluffy White Frosting
In a saucepan, stir together:
1 c. sugar
1/3 c. water
¼ tsp. cream of tartar
Cook over medium heat until the sugar is dissolved and mixture is bubbly.

Gradually add the sugar mixture while whipping constantly until stiff peaks form. It will take about 7-10 minutes. 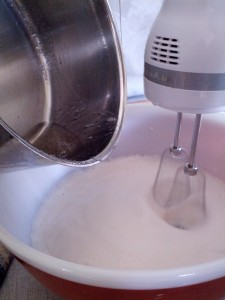 Frost the cupcakes. Decorate with desired decorations and ENJOY!!