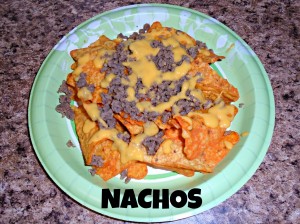 I think we all have those very hectic days when all you’ve done is run run run and the next thing you know it is way past dinner time and you realize that you and your family haven’t eaten yet. That’s when you and the kids end up eating a bowl of cereal for dinner just so you can try and catch up from the day. But what about your hunter who’s been out in the cold all day—is he really going to want a cold bowl of cereal for dinner, too? Lucky for him, though, you’ve got some Rainy Day Foods Freeze Dried Ground Beef stashed away, so he can make himself whatever snack he wants! I know my husband would use the freeze dried ground beef and the Rainy Day Foods Nacho Cheese Sauce Mix to whip up a batch of Nachos!!

Start by whip up some nacho cheese sauce. Put 1 part of nacho cheese sauce and 2 parts HOT water into a bowl and mix. For a single serving, I used 1/8th of a cup of nacho cheese sauce and ¼ cup HOT water, but it’s all a matter of preference. Microwave on high for 1 ½ to 2 minutes or until thickened, then whip with a fork.
In a separate bowl, put desired amount of freeze dried ground beef and some HOT water. Sprinkle just a little bit of taco seasoning for flavor, then stir the meat, water, and taco seasoning. For a single serving, I used ½ cup freeze dried ground beef and 1/8th cup HOT water, but again, it’s all a matter of preference. Warm up in the microwave for about a minute, stir, then drain the excess water. 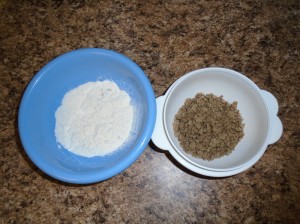 Dump out some chips on a plate, add the meat and cheese sauce and whatever else sounds good on nachos, and eat up!! 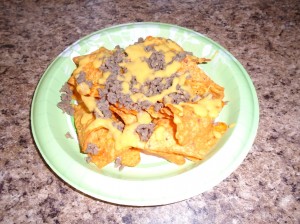 Put sauce, meat and other toppings over chips. Yummy![/caption]