Hearty, hot soup during the summer?  It makes sense if you work in an air-conditioned office and need something to warm you up at lunchtime!  Chock full of broccoli, potatoes, and cheese, this chowder is filling on its own or delicious with a cool salad on the side. It also freezes well, so make a large batch and put some away for the autumn months. 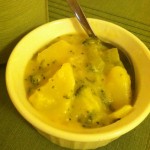