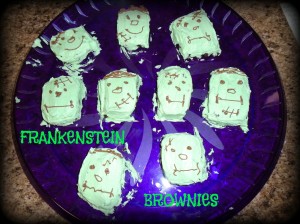 When it comes to Halloween, there are many different monsters that come to mind—ghosts, witches, vampires, zombies…but the one that seems to stick out the most in my mind is Frankenstein. So for this special treat, we’ll use Rainy Day Foods Brownie Mix to make brownies and dress them up with frosting to make them look like Frankenstein’s head.

Cook for 25-30 minutes—you’ll know when it’s done by sticking a toothpick in the brownies and the toothpick will come out clean.

Use chocolate frosting in a Ziplock bag to give them Frankenstein face!