Things to consider when purchasing your grinder. 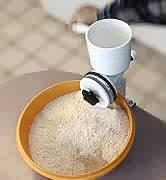 Grinding Wheat Is Work
The first thing people need to know is that grinding wheat can be a lot of work.   Wheat kernels should be hard and will take some amount of energy to turn it into soft, powdery flour. As the tests results will show, some manual grinders require much less energy than others.

Three Important Things To Consider About A Grinder:

The Controversy - Stones VS Burrs:
Stones used to be made from natural rock but now are synthetically manufactured. Good burrs are made from hardened steel. You won't find much controversy over burrs but you will concerning stones.

Stones: A stone grinder will give a finer grind than burr grinders. Modern grinder stones are made from aluminum oxide. This includes the stones in the Wonder Junior and Wonder Junior Deluxe.

Some opinions have been formed about the stones and health issues.

There are some who  choose not to buy one of these grinders because of the aluminum oxide stones. But there's a world of difference between aluminum and aluminum oxide. From the beginning to the end of the manufacturing process, aluminum has never been involved in making the stones. When these stones are made, the manufacturer starts out with the same material that aluminum is made from, bauxite. Bauxite is a red clay that's dug out of the earth. Then it's heated up to over 2,000 degrees C for several days until all that's left is a cinder. This is what the stones are made from. There is no aluminum in them. The aluminum oxide is as harmless as sand and if a particle does break off the stone it will pass harmlessly through you.
The bottom line is you will have to make up your own minds about this issue and go with a burr or impact grinder if you still feel aluminum oxide poses a health risk to you.

Cost VS Use: You may wish to temper your decision on the quality of grinder you will be spending your hard earned cash on by how much you think you will be using it. There are many who have purchased a manual grinder, have never used it, and depending on circumstances, never will use it. Contrast this with the families who use a grinder every week to make breads, pancakes, rolls and cereals with freshly ground wheat. You will have to determine if you want to invest in a manual grinder that will only be used to get you through the tough scrapes or will you be using it all the time.  A grinder is an investment.  The reward comes from its use.  Perhaps some real thought should be put into getting a grinder that will nicely serve the expected needs of your family whatever they may be.