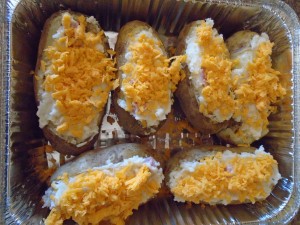 During the holidays, it’s a tradition for families and friends to all come together and celebrate. When it comes to celebrations and get-togethers, food is an absolute must-have! Everybody loves food! And when you have a lot of people gathered together, you either need a lot of food or something that’s filling! Twice-baked potatoes are very filling! They are also simple to make, so you can make plenty for everyone with ease, which is great for us because they are definitely a crowd pleaser in our family!

We start by preparing our potatoes. Preheat the oven to 350 Degrees. Then lay out one sheet of aluminum foil for each potato. Wash each potato and then slice just a small but long chunk off the top, but put back on the potato to keep the potatoes moist while they bake. DO NOT PEEL YOUR POTATOES! 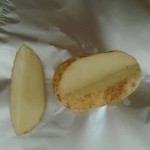 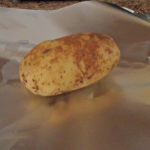 wrap the potato in foil[/caption]

Wrap the potatoes individually in the aluminum foil and place the potatoes directly into your oven on the wire racks. Bake the potatoes for about an hour and a half depending on how big the potatoes are. For this particular recipe, the bigger the potatoes, the better, but it really doesn’t matter! 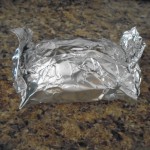 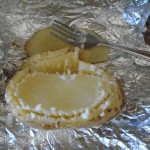 scoop out inside of potato[/caption]

Once the potatoes are done, remove the potatoes and leave the oven on. Unwrap the potatoes so they start to cool, and then one at a time, remove the piece you cut off and discard. GENTLY stab the potato with a fork in the area that you cut off, and scoop out the insides and put into a big mixing bowl. When gutting the potato, think of it as if you were making a canoe--try not to scoop too close to the skin of the potato so that it will hold its shape, but try to get as much of the insides out as you can so there’s enough room to fill it with the final mixture. 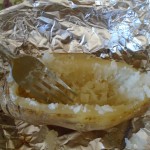 Once the potato is gutted, set the hollowed-out potato into a big cake pan and set aside. (if you’re traveling, it’s easier to put them into a deep, disposable cake pan). 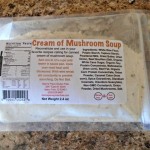 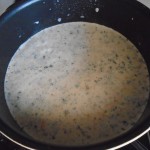 To make the cream of mushroom soup, mix the soup powder with 1 ¼ cup of cold water in a pot on the stove on a medium heat.

Stirring continuously, let the runny mix heat up until it starts to thicken. You do not want the soup to boil, but heated just enough that it gets the consistency of soup. 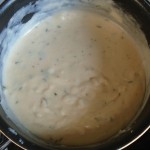 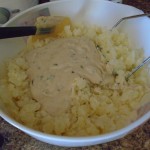 add soup and other ingredients to potatoes[/caption]

Once the mix has thickened into soup, remove from the heat and pour into the big mixing bowl of potatoes.

Add a small container of sour cream, some ham chunks, and some optional chopped onions. Stir well. You can also stir in some shredded cheese, but I like to save the cheese to put on top. 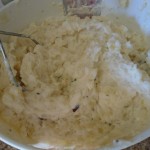 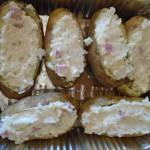 Once everything is blended together well, scoop the mixture of potatoes into the hollowed-out potato canoes.

Pack the potatoes well and then top with cheese. Put back into the oven for about 15-20 minutes, or until the cheese has melted.

Like this idea? Well then you’re in luck because we’ve got these creamy soups as a gift pak for you to give as the perfect gift this holiday season! Plus the shipping is FREE for all of our holiday gift paks! 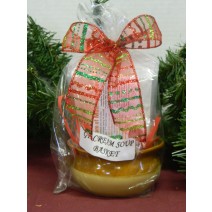