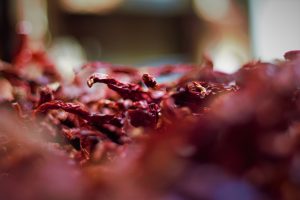 Photo by Muyuan Ma on Unsplash[/caption]

One of the main reasons why dehydrated foods are chosen by so many families across the globe is because dehydrated foods can be preserved for a long period of time without any refrigeration—as found in the 2022 Dehydrated Food Market Size report. Take blueberries—a juicy fruit that is only harvested from June to early August in the US and that goes mushy after about 5 to 10 days in the fridge. Dehydrating them can extend their goodness to a full year at normal temperature! While most people appreciate this quality in dehydrated foods, many still fail to appreciate the many benefits they bring. In fact, there are many myths surrounding dehydrated foods that can easily be debunked.

If you thought dehydrated foods couldn’t be part of a healthy lifestyle, think again! A 2020 Penn State University study has found that people who enjoy them are healthier than those who don’t. Dried produce provides them with greater amounts of some key nutrients than they consume on days when they avoid these foods. The key to making the most of the nutritional quality of dehydrated foods, said the researchers, is to eat smaller portion sizes (because the water content of dehydrated foods is much less) and to choose foods without added sugar. While it is true that heat, air, and blanching can lead to a reduction in two main nutrients (such as Vitamins A and C), dehydrated foods actually maintain most vitamins, minerals, and antioxidants for much longer than their fresh counterparts. Keeping produce in the fridge, for instance, can lead to a reduction as high as 50% for some nutrients.

If you thought you couldn’t consume dehydrated foods as part of a low-cal or low-carb diet, the good news is that you can. For low-cal diets, simply reduce your portions and read the serving size information that is on the package. For a Keto-style diet, stick to low-sugar dehydrated produce such as zucchini, cabbage chips, green beans, and eggplant. To work out the net or actual carbohydrate content you are consuming, simply subtract a food item’s fiber contact from its total carbohydrate count. A low-carb dehydrated food should ideally have less than 20% of its calories coming from carbs.

If you’ve never had vegan bacon (made from dehydrated zucchini with spices), crispy dehydrated cabbage, or dehydrated marinated onion bits, then you could think that the number of dehydrated foods is relatively small. To discover more about this flavor-packed world, get into the kitchen and try a few dishes of your own. A dehydrator costs between $30 and $400, so you can easily experiment with this technology without overspending.

Dehydrated foods are nothing more than fresh fruits and vegetables that have been stripped of their water content. Previous myths had suggested that dehydrated foods could cause dental issues because they could theoretically stick to teeth. However, more recent findings have shown that they can actually promote better oral health. Research has shown, for instance, that prunes encourage salivary flow through chewing. They also have antimicrobial properties, fiber, and low fermentability. Keeping teeth healthy after eating dehydrated foods is as easy as it is after consuming other snacks. Simply brush and floss and avoid foods with added sugar.

Dehydrated foods are delicious, reasonably priced, and long-lasting. They can also play a key role in maintaining a healthy lifestyle. They are packed with nutrients and, in some cases, conducive to good dental health.