I figure I can’t possibly be the only person who doesn’t know anything about the many varieties of wheat that are available. I am going to blog on a few of these in the next few weeks as I learn more about them.  The first one is KAMUT.

KAMUT, pronounced Ku-Moot, is a brand name for an ancient, recently revived strain of wheat known as khorasan wheat.  The large kernels-about twice the size of standard wheat kernels-have a sweet, almost buttery flavor that is delicious in pilafs, soups, and salads.  KAMUT’s history is as interesting as you can find.  The story is told that a young Montana airman was stationed in Portugal.  Someone gave, or most likely, sold him 36 kernels of this grain telling him it came from the pyramids of Egypt.  The serviceman mailed them home to his wheat-farmer father who planted them.  Of the 36 kernels, 32 sprouted and for the next six years the farmer carefully tended the kernels and their offspring.  This unusual wheat was shown at the county fair and was called “King Tut’s Wheat.”  The grain never really caught on at that time, but in 1977, Bob Quinn, who had been a boy at the fair, scoured the country side and came up with a bottle of that wheat.  By 1988 he had the strain built back up so he could start marketing it commercially.

KAMUT is a high-protein grain, generally containing 30% more protein that wheat.  Due to its slightly higher fatty acid content, KAMUT can be considered a high energy grain, and contains elevated levels of vitamin E, Thiamin, Riboflavin, phosphorus, magnesium, zinc, pantothenic acid, copper, selenium, and complex carbohydrates. It does have less fiber than wheat and is easy to digest.  KAMUT brand khorasan wheat is also always grown organically and is GMO free.  You can use KAMUT in your recipes that call for wheat by grinding it into flour.  It goes great in cakes, breads, rich desserts, and homemade pastas.  However, be aware that KAMUT is closer to durum wheat than the hard wheat varieties and doesn’t contain as much gluten.   Because of this, you may want to add wheat gluten or expect a little heavier loaf of bread.  Many say that one of its distinct differences from traditional wheat is that it is not bitter and has a natural sweetness, so you may not need to use as much sugar if you bake with it.  Puffed KAMUT cereals and crackers are also available in health food stores.  It should be noted that KAMUT can sometimes be tolerated better than common wheat by those with slight wheat sensitivities or allergies. Be sure to check with your doctor before trying it if you have these sensitivities.  However, it is definitely unsuitable for those with celiac disease or gluten intolerance.

1.  Stovetop Method:  Soak 1 cup of KAMUT overnight; then add 3 cups of water and bring it to a boil.  Add a pinch of salt (if needed), turn heat to low and simmer for 40-45 minutes or until tender.

Note:  Not soaking it will increase the cooking time substantially.  If you do soak it, you may not need all of that water to cook it in.

2.  Pressure Cooker Method:  Although the need to soak is not necessary it helps with the cooking process.  Start out with 1 ½ cups of water to one cup of KAMUT.  Increase it to 2 cups if this isn’t enough.

3.  Steamer Method:  For 1 cup of KAMUT use 2 ½ cups of water.  Place it in a steamer and it takes approximately one hour.

Rainy Day Foods carries KAMUT in a #10 can, 25# and 50# bags, and 6 gallon buckets. They also have it in a small mylar bag for sprouting.  I believe that if you try KAMUT, you may just decide to keep using this new but ancient grain. 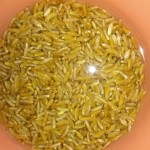 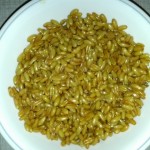