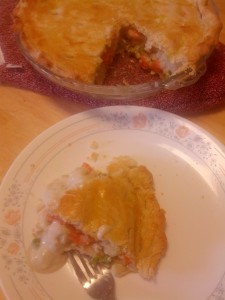 One of my family’s often requested meals is Chicken Pot Pie. I acquired this recipe from a friend several years ago and it was quickly put into the rotation of favorites. While it takes a little time to make, the oohs and aahs you will hear make it worth the effort you put into it. This recipe makes two 9” pies so you can feed a lot of people or have leftovers the next day. If you look closely you will notice that nearly all of the ingredients in it can be acquired from Rainy Day Foods. Here is the recipe:
Chicken Pot Pie
1 lb. chicken or Freeze Dried Chicken Dices
½ cup chicken broth
Put chicken in pan with broth. Cover and bring to boil. Let simmer for 20 minutes and cool the chicken. You can cut it into pieces or shred it. Set aside. 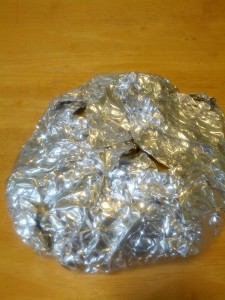 wrap the dough and refrigerate[/caption]

Sauce:
½ c. butter or butter powder
½ c. flour
3 c. chicken broth
2 c. half & half
1 tsp. thyme
2 tsp. salt
1 tsp. black pepper
¼ c. chopped onions
Melt the butter, stir in the flour and gradually stir in broth and half & half. Bring to a boil and cook one minute stirring constantly. Add the thyme, salt, pepper and onions. Combine the sauce, chicken and vegetables. **Note: I only use about half of the sauce when combining. I save the other half to put on top when it is served.

mix the sauce with the vegetables[/caption]

Divide dough into 4 balls. Roll out your dough and put into two 9” pie pans. Fill the pies with vegetable mixture. Roll out remaining two balls and top each pie with crust. Cut vents in each pie with a knife. Brush the top of each pie with this egg mixture: 1 egg mixed with 1 Tablespoon water. Save the egg to brush on the pies after 15 minutes of baking. 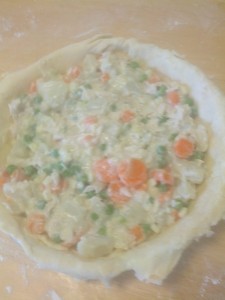 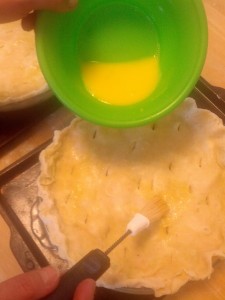 Bake in a 425 degree oven for 35 minutes or until golden brown. Serve with remaining sauce.

I hope you enjoy it as much as we do!