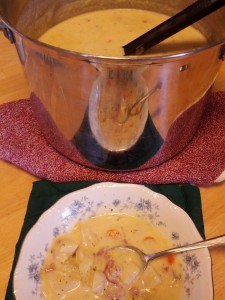 One of the things I got for Mother’s Day weekend was a snowstorm. Because it was cold and snowy I decided we needed some soup to keep us warm. I decided to make one of our favorites: Creamy Potato Cheese Chowder. My entire family loves this soup and asks for it all winter long so I always make a large pot of it. Here is the recipe:
Put the following into a large stockpot:
8 cups water
4 tsp. chicken bouillon
1 onion, chopped or ½ c. chopped onions
1 c. sliced carrots*
1 tsp. garlic salt
1 tsp. parsley flakes
1/8 tsp. basil
*1/2 c. carrot dices can also be used* 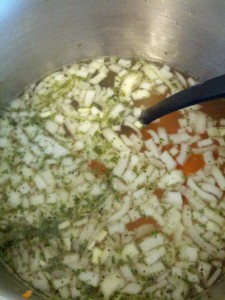 combine the carrots, onions, and seasonings[/caption]

Boil until carrots are starting to round. Then add:  3 medium potatoes, peeled and sliced** Cook until fork tender. ** You could also use 1 1/2 cups Potato Slices cooked in 3 cups of water**

In a separate pan: brown 1 cup ham* or bacon. (I like to use a little of both.) Add this to the soup. *You could also use 1 cup freeze dried diced ham cooked in 1 ½ cups of water*

In a saucepan:
melt ¾ c. butter*
Add ¾ c. flour
1 ½ tsp. salt
½ tsp. sugar
1 quart of half and half cream Cook until it thickens stirring constantly. 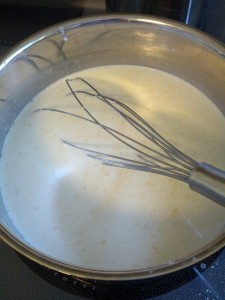 Add it to the stockpot.
* You could also use ¾ c. butter powder mixed with approximately ¾ c. water* 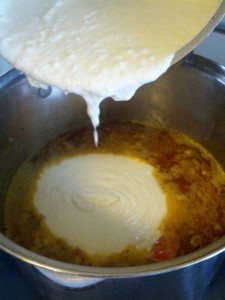 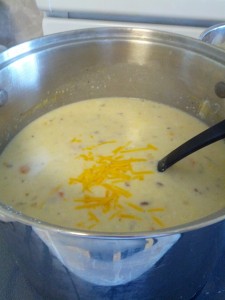 add the shredded cheese to the soup[/caption]